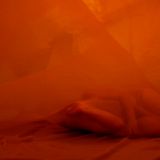 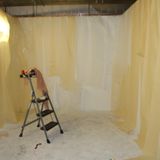 Photos of first layer of Installation

This is an Installation I created while attending the Pennsylvania Academy of the Fine Arts, 2010. The installation space at the Academy when exhibited was 10'x17'x12'. The entire space including the ceiling, floor and walls were covered with hand-stitched fabric. Once I installed the piece I performed privately inside the space while being filmed. Viewers interacted with the space by walking into the installation and observing the existing environment as it was left at the end of my performance. The filmed performance was projected onto the farthest wall inside the space for the viewers to observe. This installtion is still being exhibited in new lights and audience participatory realms.
Here is a micro-documentary during a period of my installing process. Filmed and edited by Daniel Brown of Wide Eyed Pictures.
Performance video coming soon.
     